January of 2008, I received the Essure procedure. My Doctor confirmed a few months later that I was fully sealed.

In early November, I was sent to a different city for work. I came prepared for the normal every other week cycle, but quickly into my trip I noticed the period stopped. This made me nervous so I took a test and it was positive! POSITIVE!

I spent the day in the ER, and it was too early to see anything. I had my HCG levels tested every day and they kept doubling. Within a week we knew it was a viable pregnancy and it would implant and we would see it in a few weeks. July of 2009 I delivered a healthy baby girl.

Since July of 2009, I have suffered from lower abdominal pain, chronic stomach aches and suddenly started getting migraines; after 34 years of rarely having a headache.

My right side coil dislodged, and I am not sure we know where it is. I worry that it is the reason I have stomach aches. Essure was supposed to ensure my family did not grow. Instead, it did and I rarely feel great. Essure is positioned to patients as the best way to ‘tie their tubes’ without the evasive procedure. Instead, there are side effects that are far worse than the idea of recovering from minor surgery. 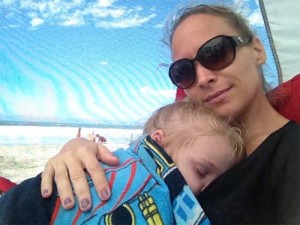