After having our fourth child we knew our family was complete so I had Essure implanted at age 30. Three months after getting Essure I was hospitalized for high blood pressure. The hospital and my Dr could not figure out why I suddenly was having issues with my blood pressure. After many tests and blood work I was put on blood pressure medication. Over time I started having all kinds of medical issues that could not be explained. I had daily headaches, severe pelvic pains, abdominal pains, severe back pain. I would become very dizzy, sometimes not knowing where I was. I would break out in rashes for no reason at all. I would pick up our youngest son and almost immediately have to put him down because I would feel like I was going to throw up.  When I would sit down it was very painful, I had to lean to one side because it felt like a needle was poking my tailbone. I became depressed and hated the person I had become. I didn’t understand what was happening to me.

My sister saw a local news interview about a women having issues with Essure. I watched the video and it all just clicked. Everything I have been experiencing started after getting Essure. I joined the group Essure Problems on Facebook and I was overwhelmed to see how many other women were going through the same exact problems I was.

I went to my OB and luckily he was willing to remove Essure. I had surgery in Dec. 2013 to remove my tubes and coils. Unfortunately, we discovered after surgery a piece of my right coil was broken prior to surgery and is embedded in my uterus. So, at the age of 33 I will be having a hysterectomy. The damage the Essure coils do not only affects women physically but mentally. It also affects our families. We can’t be the wife to our husbands we want to be and the mother to our children that they deserve. My four year old son asked me if I was going to die and he wouldn’t have a Mommy anymore. No child should have to experience this over a birth control device! Please spread the word and sign the petition on this site to help get this torture device should not be on the market! 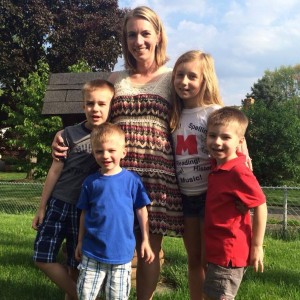