Hello, I’m 33 years old and had Essure put in dec of 2012. I thought at first that this was a great choice, but since I have had them I get really bad back aches. They would come and go and in August of 2014 I went to the doc they did x-ray and found nothing. I then just kept going on day by day with some pain, went to chiropractor. That only helped a little. Well I recently went back in to the doctor, because the pain is so bad. They took a x ray and I have inflammation around my spine which is pushing my spine out. I have attached a picture of what it looks like right now. I asked my doc if it is the Essure she didn’t know what to say. Now after much thought I’m sure I’m going to get my coils removed and my tubes. I just have to save some time off of work. I regret ever getting them and I should have tied my tubes. Think of the coils as a sliver that has entered your body, I believe that my body is trying to get rid of the coils, because they are a foreign object. Beware ladies don’t get Essure. I hope and pray that I can get them out soon. My kids need me to be able to run with them and not be in pain anymore. 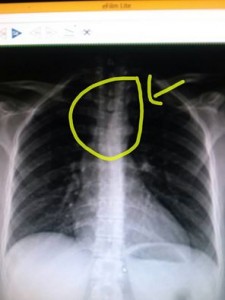