Well I thought Essure was a great way to keep from having a painful surgery. I have a cardiac pacemaker that I have had since 1999. In 2006 my husband and I were blessed with our first son (third child) and even though the pregnancy was without problems my pacemaker was not. Having your pacer changed when your seven months pregnant is not fun. Then we had our fourth child ,another son, in 2011. My heart doctor said that I probably shouldn’t have any more children because it is just to much for my devices and it puts a lot of strain on my heart. My husband and I agreed and looked at many permanent forms of birth control.

Essure sounded like a gift from heaven. I was a little sick when they put them in and thought it would be alright I just needed to lay down and rest for a day or so. The next year and a half were great. Then the infections started. Yeast infections, urinary infections, and this horrifying rash that my family doctor has no idea what it is. In the spring of 2012 is when it all started. Now I have had the same yeast infection and rash since December 2012. An ultrasound showed that I have a fluid filled mass and according to the FDA website and the studies for Essure in the early stages causing fluid buildup and cysts. The other symptom that has my doctor scratching his head is the almost constant seeping of fluid that seems to cause my rash to feel like hell fire. The list of the things that I can no longer do and how this has had absolutely evil repercussions on my life is a long one and it is getting longer every day. I just wanted to be happy and healthy I didn’t sign up to have a hysterectomy at my age. I didn’t want to have another surgery and I didn’t want to be cut on again. Essure sounded like heaven and wound up being hell. Conceptus Inc. needs to pay for the pain and discomfort and problems their product has cause me and my family! I have included a picture of my beautiful children. 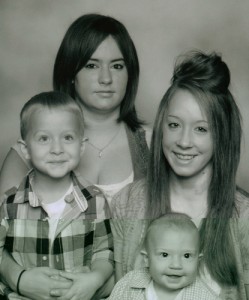