My name is Collista, at 27 years old and pregnant with my fourth child I began discussing permenant birth control with my doctor. I told her I wanted a tubal litigation because I didn’t want to take any chances with getting pregnant again. She insisted that because I am a large woman that no one would give me one. She introduced me to Essure, with the pamphlet in hand I set out to do my research. Like many other woman, all I could find was good news, and good stories. One thing concerned me though, the product contained nickel. I had always had a sensitivity to nickel, if I wore cheap earrings my ears would get massively infected. I questioned the usage of the product for that reason. The doc reasurred me that there wasn’t enough to cause me any problems, reluctantly I scheduled my appointment. At the pre-op she once again insisted all would be fine, even had the nerve to tell me the nickel warning had been removed (turned out it hadn’t been for at least another month).

The procedure went well, minimal pain, minimal bleeding. I was back to work the next day. However within a week that all changed. I began experiencing lower back pain beyond control. My periods went from mild to moderate, I would bleed through a super tampon and a pad in less than thirty minutes, for weeks not just days.

One day while at the store with all four of my kids, single mom by the way, I suddenly felt as if my heart had stopped. Then it started up again, it happened again and again, I literally had to sit on the floor in the middle of the store. After being taken to the hospital and having every heart test possible they could find nothing wrong with me. Shortly after that terrifying experience, I began getting the tingling and electrical sensations in my legs and arms. It was off to the doctors for nerve conduction tests and MRI, again, nothing.

In October of 2011, I was driving my car when my leg began tingling and then to my horror seized up. I couldn’t use it to break, it was completely and utterly numb. I slammed into the rear end of the woman in front me and proceeded to cause a three car crash. To my horror after again being checked by docs, nothing was wrong with me.

I went to my pcp hoping he would help, however he diagnosed me as having panic disorder and prescribed anti-depressants and antipsychotics, which I never filled. I changed doctors instead. Again, I was brushed aside as an overly stressed, overly worried mother. More anti-depressants, which I didn’t fill again, and an order to see a psychologist.

By this point I had put on more weight than I had when I was pregnant. I looked about seven months pregnant and was so sick I couldn’t enjoy my life. I couldn’t hold my daughter for more than a couple minutes and playing with my kids…forget it. My days consisted of dragging myself around work and then laying on the couch or floor to sleep while the kids ate dinner. I literally couldn’t even hardly cook, such an easy task became a challenge so great I could never complete it.

In May after picking up my children from school I began having pain in my lower abdomen so bad I was doubled over in the parking lot and couldn’t move. I was rushed to the ER by my father, there they began checking for everything from a burst appendix, to gallstones, or an ulcer. Long and behold, nothing, until an ultrasound was done. While the ultrasound tech had never heard of pressure and I was explaining it to her, she discovered that one of the coils had become lodged in my uterus.

I called up my ob/gyn and explained my concerns, she agreed to speak to me. After reviewing my file of over 10 months of issues, and listening to my problems, she admitted essure could be the source of my problem. 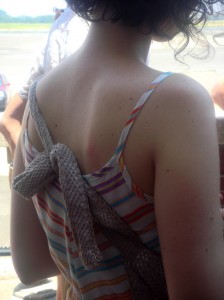