Hi, I am currently recovering from the removal of my tubes and coils. I didn’t realize the the cramps,hip pain,mind fog,forgetfulness was essure related until I started researching if you could become pregnant after essure. I was skeptical at first but the more I researched it the more I realized that Bayer (then Conceptus) tricked many women including me. In doctor’s offices many women were told quick easy and pain free. Not the case, I spent 3-4 hours in the hospital getting the essure after being put under twilight sleep. I went home and after 2 weeks the pain medication was still required and I bleed for 12 weeks straight, at this point I was upset because the doctor’s office never returned my phone calls or if they did I never received any messages via cell phone or land line. I went on with my life. Each monthly cycle was worse than the previous, I was cramping 3 weeks of every cycle, and no amount of over the counter pain releiver wold help. Then I became involved with my partner and even more problems started. I couldn’t even be intimate with him without having severe pain and bleeding. I was even more shocked in May of 2013 I found out I was pregnant. Essure almost ruined our relationship because he didn’t think it was possible. However I went into preterm labor and had our son in best estimates 3 weeks early. Logan has a hole in his heart that will require monitoring until he is 2. I had a doctor who was so busy trying to find a problem he didn’t listen to his patient, he didn’t want to even deliver Logan and he refused to believe I was in labor. The labor lasted 2 days, and we barely made it to the hospital in time. No where on my medical records did it even say I had essure so I reminded him as I was talking about birth control. He was very hesitant on removing the coils,much less on my tubes but at this point I didn’t care I was in that much pain and I couldn’t mentally function. I told him what I wanted done and it had to be done. Now I am a good 8 weeks out and my life is getting back in control and I am me again. I want to thank Erin and the Facebook group Essure Problems for pointing me in the right direction.The picture I choose is our essure baby Logan who is currently 3 months old. 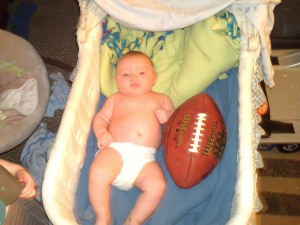