I had 4 children from a previous marriage.  After many years of an abusive marriage, I worked up the courage to leave.  Then I was raising 4 children all alone.  I was sure I was done.  Then, I met Manuel.  He was great with my kids, treated me right, had a stable job and we had everything in common! Well he had NO children of his own, so we agreed to have one child.  Our beautiful baby girl was born on March 26, 2011.  We were ecstatic with the new addition to our family.  My older children really enjoyed have a new baby sister.

So this was it!! My time had come to get permanently sterilized. No more children for our family.  I began taking the birth control pill again until I made a decision as to what I wanted to do.  I had seen the brochures in my GYN doctors and was very interested.  I thought, no more birth control pills or hormones. It’s 99.9% effective. This means I practically have NO chance of having another child again, without the hassle of having to take pills or deal with hormones. The only thing that bugged me was the thought of having two metal coils inside my body for the rest of my life.  I wondered if it was safe.  I read on and it said the materials in Essure were totally safe.

I went to see my doctor at the VA and expressed my interest in the Essure procedure.  She told me, ‘We DO NOT perform this procedure here, but we can schedule you for a tubal.’  I agreed.  I went ahead and scheduled my appointment and was given a new prescription for birth control pills in the meantime.  Well, I never went to the my tubal appointment because I wasn’t able to take the time off work.  I got sloppy when taking my birth control pills and I got pregnant again.

This time, with a beautiful baby boy.  When I learned of this pregnancy, I told myself that I would by NO Means would I miss my appointment again.  I was 35 and considered high risk because of my age.  I had all kinds of tests done to be sure that the baby would be OK and had no birth defects.  The pregnancy was difficult for me. But he was born on November 9, 2013.  Healthy and strong.

On, February 28,2014 I was implanted with Essure.  The procedure was quick and easy. I was in and out in about an hour.  My husband took me and I came home to rest.  I bled a little then that was it.  I did not feel pain or discomfort at all.  I figured I was one of the lucky ones that would have no problems with Essure.

About 1-2 months later, I began to see my hair falling out.  It began to fall out A LOT more than normal.  I was worried when it didn’t stop and I saw my hair thinning.  My next symptom was blisters on my hands.  I developed dyshydrotic eczema.  It is a type of eczema that is associated with being exposed to nickel often.  Essure is made of nickel.  Then I began to make the connection.  I got on Facebook and found an Essure group and asked if anyone in the group had experienced hair loss or blistering hands after being implanted with Essure?  They said NO that I was crazy and imagining things.  I thought it was me imagining this.  I kept searching and found another group called ESSURE PROBLEMS.  I asked again and I got ton of responses on the group.  I was saddened to hear of all the horrible stories and all the women that had to have hysterectomies in their 30’s and 20’s.  I heard horror stories and unplanned pregnancies in the group.  I was shocked to learn that after having been confirmed 100% blocked, women were still getting pregnant.  I went in for my HSG test and was confirmed blocked in June 2014.

Then, I began having bleeding gums and very sensitive teeth.  I believe it is Essure related as well.  Recently, I have began having pain on my right side where Essure is implanted.  It only hurts when I move, and during intercourse.  I feel a heaviness in my uterus. I have also gained about 12 pounds.  I NEVER gain weight.  I have stayed the same weight for years.  Now all of a sudden, my pants won’t close. My stomach is bloated and I have developed an E-Belly now!!  My back began hurting too.  I have terrible back aches and my husband asks me whats wrong and I can’t even tell him.  I don’t know whats wrong, all I know is that I feel pain all the time. The eczema on my hands has gotten so bad that I can barely bathe my kids, write or do every day daily tasks.  I get blisters so bad on my hands which turn into extremely dry skin that cracks and is extremely painful.

This is my story.  This is what Essure has done to me. I am praying that I can find a doctor to listen to me and that will remove them for me!  I am seeking removal before the coils migrate or worse issues begin to happen to me.  I am praying that ESSURE gets removed from the market.

If you are allergic to nickel, DO NOT get Essure.Your body will reject it and you will begin to have problems. Essure has toxic materials, PET fibers that cause inflammation in your body.  They are toxic and will give you problems. Doctors are pushing this procedure on patients because the get thousands of dollars for every procedure performed. I was NOT properly informed about this procedure, and would have NEVER gotten it if I would have properly researched these evil coils. 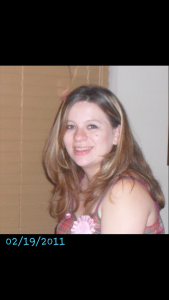