In May 2009 I decided to make major life altering difference in my life by deciding to have Gastric Bypass surgery.  After the surgery I had many complications.  One of them being excessive menstrual bleeding.  In June 2009 I began to bleed profusely which came with severe cramping.   This went on until I had a Cryo-Ablation done in August 2009.  After several doctor visits with my family Doctor and Gastric Doctor, I was referred to my current OB-GYN, who performed the Ablation.

When I had my first appointment with my new OB-GYN Doctor it was a huge relief.  I went into that appointment in tears, practically begging her to do something as the pain and profusive bleeding was unbearable.   I couldn’t take any more time off work as I used all my time up from the Bypass Surgery.  My doctor suggested a Cryo-Ablation and asked if I planned on having any more children.  I said no as my husband and I had decided we no longer wanted a child due to our age and had given up on trying.  She stated that I still had a very slight possibilty of getting pregnant, but the chances of carrying a child to full term was minimal and very risky, If I did get pregnant, I would not carry to full term and would possibly need an abortion, so she wanted to be sure I wanted no more children (I already had a 20 year old daughter).

A Cryo-Ablation was the answer I was looking for and I went for it!  During my many visits the Doctor had stated my uterine lining was very thick. Due to my past issues with an irregular almost non existent menstraul cycle the lining had thickened.  Due to my rapid weight loss from the Gastric Bypass surgery it had basically opened the flood gates for my menstraul cycle, so I had a non stop period.  The Cryo Ablation was to freeze my uterine lining, thus making it much more difficutl to bear a child and I would eventually stop havign a period all together.   I was very happy with this decision and thought nothing more of it other then an answer to my prayers of pain and suffering.

The Cryo-Ablation went well, however my periods did not stop.  Every month I would basically have cramping and spotting for 2 to 3 days, which in my cae was much better then bleeding non stop.  In June 2010, after reaching my Plateau in my weight loss of losing over 135lbs, we found out that I was pregnant.  WOW…what a shock that was!!  To make an already long story a little bit shorter, we now have a very healthy and happy 2 year old.

The pregnancy was a high risk one, but actually went very well and I had my baby girl in February 2011.  My Doctor already knew I wanted no more kids, so after my daughter was born I went in to discuss my options.  She gave me 3 options, one of them being the Essure Procedure.  She told me this was a new procedure and that if I chose it I would need to have a Representive present to observe the procedure being done and make sure nothing went wrong and that it was done correctly.  This procedure was the least evasive to choose from and allowed me to go back to work as I still had no extra time to take off.   She woudl aslo being doign another Ablation…a Thermo-Ablation this time.

This was a new procedure for the office and they had not performed very many, which was another reason for the Rep to be present.  I was sort of the Poster Child for this new procedure.  In June 2011 I had both the Essure and Thermo-Ablation procedure done.   They procedures actually went off without a hitch.  It only took about 20 to 40 minutes and she stated she got the little coils in there with no issues. I went home happy.

Ever since this procedure I have had abdominal cramping as well as always feeling bloated.  I spent 3 years in and out of the Doctors offices from 2009 – 2012.  I no longer wanted to see any Doctors, so I did not go back to my OB-GYN for the final check up on the Essure procedure.  I just figured this was pain I would have to live with as a side affect to my procedure.  Before my pregnancy and before all my suregeries I rarely if ever had a period…now I have them every single month.  Luckily they only last for about 3 days, but the cramping is severe for about a week and sometimes dibilitating.  I have cramping and bloating to some extent every single day, but I just live with it and didn’t think anything of it until I happened upon this site.

We go in trusting that our Doctors know their stuff and that they are there to help us.  I feel like I am just now awakening to the reality that being a Doctor is a business like anything else.  I somtimes feel they are strctly in it for the money and to keep us sick, so we keep coming back.  I just recently went in for a check up with my OB-GYN and she did not seem too concerned about my cramping or bloating and just prescribed some pain meds, which I never filled as they were too costly, plus I simply hate taking pills.  This time when I saw her I saw her in a new light.  She seemed very excited about new procedures and new devices that Big Pharma’s are pushing as well as giving a shout out to Dr. Oz, which I personally could care less about…I am not one to jump on the Oprah bandwagon and don’t believe Dr. Oz is in it for the little people like me.

I am now in search of a more Holistic Doctor that can provide me more Natural alternatives to my pain.  I just hope my insurance will cover that! 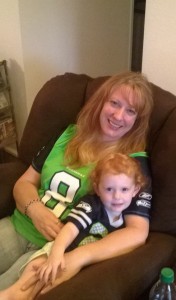