I had the Essure procedure done in August of 2006.  I was a twenty-six year old mother of three girls.  My eldest daughter was seven years old, my second born daughter was three years old and had just been diagnosed with a rare auto-immune disease, and my baby girl was two months old. I was under a lot of stress and I was finished having children.  I originally sought to have a tubal ligation.   My doctor told me about a new procedure, the Essure.  He said it was quick, painless, and safer than a tubal.  He told me I wouldn’t have to have surgery and I could go home the same day as the procedure with virtually no pain or recovery time.  He was very excited about this new procedure and told me I would be his ‘guinea pig’.  The procedure itself was okay.  I had some cramping but then it was fine.  Or so I thought.

The last almost eight years I have had intense abdominal pain, back pain, headaches, body aches, and unexplained fevers.  I’ve had weight gain and periods of abdominal distention and bloating to the point where I looked pregnant for months at a time. My doctor at the time dismissed it as ‘gas’. I’ve seen countless doctors over the years who saw nothing wrong and have told me that I’m ‘making it up’, that I’m ‘crazy’, or have accused me of being a ‘drug addict’.  I haven’t been able to work for five years, I haven’t been able to run and play with my children, I haven’t been able to participate in LIFE!  My personal relationships have ended.  Sex has been painful, I don’t even date anymore. I can’t stand or walk for more than a few minutes.  I’m thirty-five years old.

A year ago my mother had read an article about some women having problems after having the Essure procedure.  So I went to a new OBGYN to see if I could have the coils removed.  He agreed to remove my fallopian tubes.  This is when I found out about the fact that the FDA decided not to tell women about possible allergic reactions to nickel.  I am allergic to nickel and I thought having my fallopian tubes removed would ease my suffering.  When he did the procedure he found some endometriosis, and was able to remove most of it.  I was relieved because I thought that was the cause of the pain and it would go away.  I was wrong.  I suffered for another year and went back to ask the doctor to perform a hysterectomy.

I had my hysterectomy ten days ago.  My doctor found no endometriosis.  What he did find was pieces of metal and coils embedded in and poking through my uterus.  My doctor told me that the Essure procedure hadn’t worked, and that I could have become pregnant.  He showed me pictures of my uterus, with pieces of metal sticking all over it.  I’m still hurting and healing from the surgery, but I can tell a huge difference.

I am so thankful to these women who have shared their stories.  If not for them I’m sure I would still not have a clue what was wrong with me.  I am also angry.  I want those eight years back.  The more similar stories I read, the more appalled I become.  There are laws to protect the drug companies and their devices.  Who protects US?  The women who have been tormented by this device, and their families?!  Thanks again for getting this information out there.  It’s nice to feel like someone actually cares.  Others’ experiences have saved me, and I hope somehow I can help other women find relief.

(In the picture, I’m the one with blonde hair. The brunette is my best friend.) 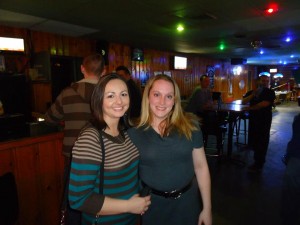