My Essure story begins in 2008. At the time I was an OR technician and had regularly witnessed the Essure procedure. From seeing it done, I decided that this was the way to go for permanent birth control. My husband is just not a vasectomy kind of guy. Six weeks after the birth of our second daughter I had it placed. The doctor said that everything went very well, although she had a little more trouble getting the one on the left side in. My left side hurt more afterwards for a couple of weeks. The pain faded and four months after having the procedure I had the confirmation x-ray showing that my tubes were occluded and I no longer needed oral contraception. I was finally free from hormones!

It seemed that since having the Essure placed I have been having increasingly heavy periods. In December 2010, I had about a weeks’ worth of period in a matter of six hours. I was so frightened and could no longer ignore my problem, so I finally went to see an OB/GYN (not the one that had placed the device). I told her that since having Essure my periods had been heavier and she dismissed my concern saying that the implants have no bearing on how heavy periods are. She ran me through a barrage of tests: labs to check my hormone levels, blood counts, ultrasound, and an endometrial biopsy to rule out endometriosis. Everything came back negative. She put me on a low dose Estrogen free birth control pill to help regulate my cycle.

I had started having hot flashes in August 2011. I had been working out and had lost 45 lbs. I stopped taking the mini pill thinking my hormones were fighting my body because of my weight loss. My period had started coming before my pill pack was done anyway. September, October, November went by and I did not have a period. Never once pregnancy entered my line of thinking. I went back to my OB/GYN in December 2011 and they confirmed that I was PREGNANT. 13 weeks pregnant. An ultrasound confirmed that I had an intrauterine pregnancy. My doctor was shocked as well; I am the first in their practice to become pregnant after Essure.

Our third daughter was born in June 2012 via emergency C-section. She was born in a Catholic hospital so therefore my doctor could not perform a tubal at the time of the C-section, to have that done I would have needed additional surgery.

In September 2012 I underwent a laparoscopic hernia repair and tubal ligation. I had my OB/GYN and a general surgeon working together. They discovered that the left Essure implant was embedded in my peritoneal cavity while the right Essure implant had perforated the fallopian tube and was contacting my colon. The right implant was removed and the left one still remains inside me.

My third daughter is beautiful, healthy, and a blessing. I do not regret her at all. The shock of finding out I was pregnant again after being told that I would not have any more children was immense. I have had to quit working and become a stay at home mom. Day care in our area is expensive. We are military and have no family anywhere close to us. I have battled anger, depression and guilt. I am no longer financially independent and that has been the hardest thing for me to cope with. My baby is five months old now and I think that we have adjusted to the change pretty well. My older girls still miss going to Day care and seeing their friends. I can’t go out and get a pedicure or get my hair done whenever I’d like. We eat out a lot less. I can’t afford to eat as healthily as I’d like to re-lose the 45 lbs. I had lost before my pregnancy. I battle self-esteem issues daily. I’m lost in a tug of war; I love my new baby with all my heart but I’m no longer me. I don’t blame my doctor that placed it; I blame Conceptus for failing to disclose the multiple failures of the device. 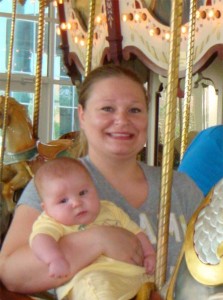