My name is Kendra I’m 28 years old with 2 beautiful children. my daughter 8yo & my son 5yo. I’ve always had problems with my menstrual cycle since the very first one, always heavy & irregular bleeding & horrible pain. My first visit to a gynecologist was in my early teen years before I was even sexually active.  I was put thru a series off tests & I was put on serveral birth control pills to try to regulate my periods they didn’t help so I was put on the patch, then nuva ring & when none of them helped & it was just a hassle on top of still struggling with the initial problem & getting no answers I told my mom I was done & I’d just suffer thru it without the extra & she agreed.

Fast forward to my adult life & having my children I once again reluctantly had to turn to birth control for just that. I tried oral pills & the mirena iud in 2009 because the Catholic hospital I delivered both my children in didn’t allow permanent sterilizations. The mirena had to be removed 3 weeks later in the ER from headaches, horrible pain & bleeding thru my clothes all the time!)  I was over it & decided it was worth the risk of becoming pregnant again then dealing with birth controls so I was on nothing until this year 2014 . I spoke with my Dr.several times about knowing my family was complete & wanting my tubes tied but she refused until my bmi was within a certain range. she told me I needed to try something w/hormones to help my cycles & I explained my past experiences & that I wanted a permanent solution she talked me into trying again since it had been so long again…no success & it was a hassle she even tried to get me to try mirena again &I said HELL NO! She then notified me of essure & painted a glorious picture of his simple the procedure on office, non surgical, quick recovery & the confirmation test & it was Permanent. I questioned it due to my previous experiences & she assured me this was the perfect fit for me. I did some researching myself still but didn’t find any major issues it red flags so June 25,2014 I was implanted little did I know I had just walked thru the gates of ESSURE HELL!!! From the time they were inserted I was in extreme pain, started bleeding very heavy & pretty much non stop the rare times I wasn’t bleeding I had to be very cautious & carried around tampons & spare change of clothes. The longer they were in my body the worse I felt! I had excruciating labor like cramping all the time! I got a metallic taste in my mouth, headaches that turned into migraines & horrible joint pain I felt like a 98 year old woman not 28.also because I was becoming so bloated & swollen I looked pregnant & wore bigger shirts to try to hide it. I became a shell of the mother, daughter, sister, friend & co worker I was before essure. Finally after multiple Dr. Visits internal/external sonogram & my hsg confirmation test showed my coils were placed correctly but the symptoms were still there my Dr. Decided a hysterectomy was all she could do. I just had my SURGERY to remove the permanent NON SURGICAL ESSURE COILS 9 days ago & I feel AMAZING! Finally I’ve got my life back & all my symptoms were completely gone when I woke up from surgery!! I’ll never get the lost time back & there’s nothing I won’t do to prevent this from happening to someone else & saving them & their families from the pain & agony that myself & far too many other women have experienced at the hands of Bayer! I’m glad to be myself again & everyone who saw & was effected by my suffering are happy to have me back & I’ve heard so many comments about how much different & healthier I look now! 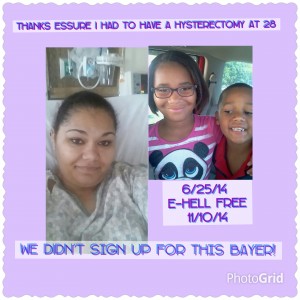