My Essure story began on April 20, 2011. I was 37 when I had the procedure. I believed the hype my doctor told me and I too thought this was the best thing ever.  Who wouldn’t want a non-hormonal, non-surgical permanent birth control with no down time?

I was knocked out so I felt no pain during the procedure. I had a little cramping that day, but not much. I thought then that life was back to normal a few hours later. Well, the first thing that happened to me was that I gained weight fast. I thought maybe it was due to the fact that I was getting older until I kept gaining and wasn’t able to lose it.

I went for my three-month HSG test, which hurt like hell. It was confirmed everything was closed up tight. My period did get heavier and my doctor offered to do an ablation, which I chose not to do.  My period got better on its own but there were more clots than blood.  Still, I thought Essure was awesome because I didn’t have to take a pill everyday and, other than the weight gain, I was fine.

That lasted until about November 2011 when I started getting moody and tired all the time.  I went to my doctor for my annual checkup in January 2012 and told him that my moods were out of control. I feared for my husband’s life sometimes. I would get mad and scream at him for the smallest things. If I didn’t have anything to yell at him for, I would sit there during the day and think of anything I could just to get mad at him. I would attack him verbally as he was walking through the door. My husband and I had no idea what was wrong with me, and I needed help.  I thought I was premenopausal because I was also experiencing night sweats and hot flashes.

My husband kept telling me I was bipolar.  Well, my doctor told me I was too young to be premenopausal and assured me it was not due to Essure because it is non-hormonal.  He gave me a number of a psychologist who tells him what to prescribe for me. The medicine would cost me $500. I never called the psychologist.

One day my friend told me that it was for hormone support. I started taking the medicine and it did work. However, I had to take it everyday for it to work.  Shortly after, I started to notice that I couldn’t think straight anymore. I would be conducting a PTA meeting and would just stop in the middle of a sentence because I forgot what I was talking about. When someone from the crowd asked a simple question, I would look at them like they had two heads or something because I was confused. I would blame it on the fact that I was tired, but really tired at 7 pm at the age of 38?

The summer of 2012 is when more stuff started to happen to me. I thought I was developing MS because both my arms and legs would get tingling sensations up and down and become numb. I would wake up in the middle of the night on numerous occasions because my right leg fell asleep so bad it hurt. I would also wake up because my neck and spine were in so much pain I couldn’t move. I was also having muscle, nerve, and joint pains all over. My vision would get blurry from time to time and I would get dizzy. I would forget where I was going or how to get there.

At times, while I was driving long distances there would be short periods where it was like I blacked out for a minute. I would have extreme cramps during my period and started having more and more clots instead of blood. I also started getting migraines at least four days a week and the other three days it was a headache. There would be many nights where I would wake up at around 3 in the morning and not be able to go back to sleep. I had insomnia.

I wasn’t able to have sex anymore because it would hurt too badly on my left side and I would bleed after. We couldn’t understand why alcohol and seafood were making me so sick. I never had an allergy to them before. I would be constipated from ovulation until my period with a watery discharge that had a strange smell to it.

As time went on I started to get worse and worse. Around November 2012, I was getting depressed and would cry or yell all the time. It started to reflect on my clients because I had no energy anymore and I was nasty and in constant pain. I would work for a few hours and my body would hurt so badly.

In January 2013, I started back at the gym thinking I just needed to work my muscles and thinking I would lose weight. The gym did not help.  The pain I was in after my workout was intense and I was exhausted, but I didn’t lose a pound. From that point on I started having constant lower left pelvic pain that felt like there was a knife stabbing me for the inside. I was bedridden for a whole weekend from extreme lower left pelvic pain and spasms on my right side that traveled. It wasn’t my time of month. That was the weekend I found Essure Problems FB page and found other women who were going through the same stuff as me.

I knew then that everything that was happening to me was related to Essure. I then made an appointment with my doctor. He was shocked. However, he told me that it was not Essure-related and that I was his first patient to have these problems. He did say he would remove them, but I had to go to many doctors for different tests and that it would take time. I was willing to go to all the doctors he wanted to send me to.

He sent me to get 3D internal and external sonogram and I was told where they were supposed to be. However, when he pressed down on my left side, I flipped out because it was so painful.  I went to my PC doctor and he told me I was inflamed from these coils. My neurologist wrote a letter saying it was essential these coils were removed.  The cardiologist my Gyno sent me to said even though the EKG came back fine and heart disease doesn’t run in my family, he still wanted to do an Echo and Stress test.  The GI doctor my Gyno sent me to did a bowel exam and found no blood in my poop and didn’t feel any abnormalities. He wanted to do a colonoscopy on and endoscopy on me. That is where I drew the line.

I had to switch doctors because I was getting worse, not better.  I spent more time in bed than I did out. When I did work, my body would stiffen up on me after an hour of being on my feet.  I could not move anymore without being in pain.

Thank God my nightmare ended April 17th 2013.  That is the day I had a hysterectomy at the age of 39. I couldn’t tell that my symptoms were going away until the next day because I was sick from the anesthesia and I was not eating or drinking anything.  That night when my migraine went away I felt alive.  I had so much energy.  It was like someone drained me of all my blood and refueled me with fresh blood.  I did not wake up at all with any numbness anywhere.

Since my surgery, people are amazed at how good I look. They say I look 10 years younger and that my color came back and the circles under my eyes are lighter.  I went for my one week post-op and the receptionist looked at me and looked at my chart and asked how do I look so good after having surgery a week ago.  My doctor and nurses were amazed at how good I looked and felt.  Since getting the coils out I feel amazing. I haven’t had to take any nap or painkillers to get me through the day. I have lost 12 pounds. My brain feels so crystal clear. The fog is gone and it feels incredible to think clearly again. I have not had a migraine or even a headache since I came out of surgery.

One thing I also noticed that I didn’t relate to Essure but now I am questioning is that I went to a dermatologist about a month after I was implanted because I had three spots on my right leg that would appear every now and then. They did a biopsy and it came back as a skin irritation.  Well, one of the spots is gone and the other two (including the spot where they did the biopsy) are diminishing.  I am still recovering from my surgery and the whole Essure ordeal but I am no longer depressed or miserable from Essure. I am now mad. The fact that we women have suffered and some are still suffering from these evil coils is an outrage.  I am medical proof that these coils are poison. I feel amazing and continue to improve daily. Essure says it is non-hormonal, non-surgical, no down time permanent birth control. The only thing they got right is permanent birth control. I had to lose my uterus and tubes to get these things out of me so it is permanent. No women and their families deserve to through this ordeal. 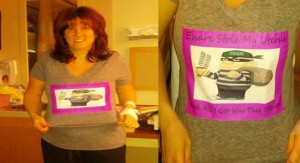