Aftet 3 children, I decided in 2010, just before my 36th birthday, I would get the Essure birth control procedure. It sounded easy & my OB-GYN at the time said side effects were ‘minimal’. The most common side effect she had seen was some cramping ‘like a menstrual period’. Most OB-GYN’s do this procedure in their office, however mine said she preferred to put patients ‘under’ & perform at the hospital, which we did (which ends up being much more costly than the ‘inexpensive birth control method’ they advertised in their brochure.)

Immediately upon waking in the hospital I felt much more pain & was bleeding more than I anticipated, especially in my left side. I questioned this & was told ‘that was normal’. Once home I thought I was going to bleed to death & was in tremendous pain. I called my doctor’s office 5 times in the 24 hours since I had gotten home to see if something was going wrong in my body. Nowhere in that nice Essure brochure that I had been given did it say this would happen. Again, each time I was told ‘that was normal’. Now, I’m a person wiht a high tolerance for pain, I’d even given birth without any pain med. So when I say I was in pain, I was IN PAIN.

The bleeding eventually stopped but the pain never did. It did get better over time but I felt like I was being stabbed from the inside more times than not, some days being better than others. The pain would be on both sides, but more significant on my left. If it was time for my menstrual cycle, then I would have a day of excruciating pain, at moments unable to stand. This was accompanied with migraines & severe fatigue. Some days if I bent over or moved just right, POW, it stabbed me. Some days it was a quick jab, other days the pain lingered.

Within 2 years, I started to feel a lot older than I was. I would have the joint pain, inflammation, body aches, & fatigue that would be expected from someone twice my age. I would go to my family doctor & tell her something was wrong, but I couldn’t figure out what that ‘something’ was. She would send me for blood test after blood test, checking everything she could think of, including my thyroid, and at one point my body hurt so bad I thought I had fibromyalgia. I had hip pain & shoulder pain & was sent for x-rays. She couldn’t find anything but sent me to physical thereapy in the hopes that would help.  If the doctor says I’m fine, why do I have to stop mid-way up my stairs to rest from the pain? Why am I literally crawling up my stairs some days from fatigue? Everyone said the same thing..’it’s because you’re a mom to 3 kids, & you work 40+ hours’. I didn’t buy it. My kids are each 7 years apart so the oldest one was age 17 & pretty much cared for herself. My middle child was 10 so he did his own thing while I sometimes helped with homework. It didn’t make sense to me, my kids weren’t so physically draining to where I should be feeling like that. My husband would get home from work before me and have dinner ready so I didn’t have to make it. He had also already picked up our 3 year old from daycare so I didn’t even have to do that. My job? I work in an office so I’m not doing manual labor all day either. I used to be active, exercised all the time, but since Essure I was lucky to put one foot in front of the other.

The beginning of 2013 was when the extreme bleeding started. I started logging it & some months I was lucky to go 10 days period free. When I bled, it included heavy clotting & each month seemed to be getting worse. The more I bled, the more stabbing pain I would feel in my sides. Despite my daily intake of vitamins, my iron levels went low & I became Vitamin D deficient so I started taking additional vitamins. This still didn’t help my body aches, fatigue, joint pain, & migraines. They only got worse and I was feeling even more sick. I was now having unexplained fevers, painful intercourse, & random bloating that made me look 6 months pregnant at times. My doctor sent me to get an ultrasound. Other than the stabbing pain that I was told several times ‘was normal’, never did I think to link any other issues with Essure.

I was called the day after my ultrasound & was told I had endometriosis. I have to be honest, I had heard of it but didn’t understand what it was. So like anyone, I turned to my computer to gain more info on it. Once I read what it was, I wondered if the scar tissue Essure is supposed to make could cause this. I typed in my search engine ‘Essure & Endometrosis’ and there it was…the Essure Problems facebook page & Erin’s website. As I read, I was in tears. I just kept reading womens stories, all alike, looking through the files the administrators of the page had compiled. ALL of my symptoms of body aches, fatigue, inflammation, painful intercourse, stabbing pain in my tubes, heavy non-stop bleeding, anemia, fevers, migraines, all of it…right there in plain sight. ALL the testing I’d had done & I didn’t make the connection before then. I felt sad & relieved at the same time. I finally had the answer. It was Essure.

While finding comfort in women that were going through the same thing as me on the Essure Problems facebook page, I saw that most had to have a hysterectomy to take care of the many issues they were now faced with. I did NOT want to have a hysterectomy. I’m only 38! I needed to find an OB-GYN that has experience with this (and I refused to go back to the one that did the procedure). I was told of an amazing OB-GYN about 40min from my home. Two ladies from the fb page said this doctor ‘connected the dots’ & saved their lives. This doctor implants Essure & for one woman, within just a few short weeks after he did the Essure procedure on her, he could see the side effects Essure was causing for her. He told her he NEEDED to remove them right away. For another woman, her coil  had migrated & was perforating other organs. I spoke (& cried) with her on the phone for an hour. This woman I had never met was like a sister to me. It’s what we call on the site ‘E-sisters’. She assured me he was an amazing surgeon & he had saved her.

July 2013 I went to see this ‘amazing’ doctor I had heard wonders about. I knew at that point I wanted Essure out but wasn’t sure how it was going to be done. I brought all my medical records with me, including my ultrasound CD. He looked at it & he talked to me in terms I could understand. Those women were right, this guy was AMAZING. I didn’t even have to talk. I don’t recall saying much at all. He had my records, he saw my ultrasound & explained how to take care of it. The answer was a full hysterectomy, including ovaries. All the way home, I wanted to cry because I was told I needed a hysterectomy, I wanted to be happy that I didn’t have to endure all of these issues anymore, but more than anything I wanted to scream to the top of my lungs ‘I HATE ESSURE!’.

My hysterectomy was on Aug 27, 2013. I currently am only 2 weeks post-op & all of the symptoms mentioned above are gone. I’m recovering from a major surgery so it’s going to take time for that to heal but each day gets better with more energy. I don’t feel like I’m slowly dying anymore but rather re-born. I can get up my stairs with ease now. I don’t have to stop anymore half way up. And that feels fantastic. 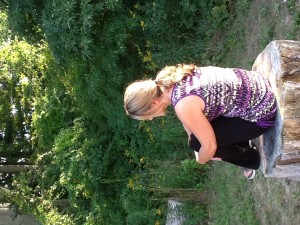