I had my fourth child in September of 2009. My husband and I felt that our family was complete. I was supposed to have a tubal ligation done right after. They decided not to do it because the doctor said that she felt a hernia under my belly button. They wanted to put me on birth control, but since I had bad experiences with birthcontrol, my husband and I decided not to. We were talked into doing the Essure device. Since I was one of the first patients for this office for the device, I had to be completely put under like I was having surgery. This was done in March of 2010. In May of 2010, I had the scan done, to make sure everything was closed up. That was a painful experience. Everything was closed up, and the doctor said I was fine.

For a year and a half I was in constant pain on my right side. Every time I ovulated, it was horrible. It was only on the right side. I also began having regular migraine headaches. It got to the point where I was having migraines at least 3 times a week, on top of my ovulation pains… I could not do a whole lot. I finally went back in to see the doctor who put this in me. I told her I wanted them out. What was suppose to be a stainless steel, surgical device, we found out it was not. I have a nickel allergy. Nickel is in the Essure device. I had to have a total hysterectomy. Surgery was in September of 2011. I left my ovaries in, because I am in my late 30s, and I did not want to go through menopause.

In January of this year, my mom passed away. The same week, I was in the emergency room. I had a cyst growing on my right ovary that burst. I was in extreme pain. The next month they went in to see if I had adhesions. They found what they thought was endometriosis. I was still in a lot of pain. In May, I was put on medication that puts me into menopause, to see if that would work. It did, a little. So then they decided to take my ovaries out. In July, I had that done. In August, I get the lab report back. My ovaries were infected. It was not endometriosis, but clusters of infections caused by the cauterization from my hysterectomy. I have little blobs of this infection attached to my bowel and my bladder.

I feel that if I never had the Essure device implanted, I would not have had to go through all of this, and what is still left for me to deal with in the future. BUYER BEWARE! The pain that I have gone through is not worth it. I am 38 and I am in full menopause. I have to take estrogen for the rest of my life now. I pray that the little blobs that are left in me don’t become anything else. 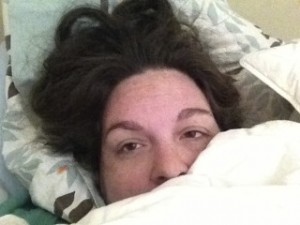