I had my Essure implants on October 8, 2012. It has only been a few weeks, and I am already miserable. I have constant cramping that sometimes (at night especially) can be unbearable. I already have a low energy level due to clinical depression and constant anxiety, but lately I absolutely cannot find the energy to do much of anything. Very hard considering I have a VERY active three old boy.

When I first realized the pain wasn’t going to go away I decided to do some research on the procedure and I am now scared beyond reason. I know that on one hand, someone should do some research for themselves BEFORE having something like this done. On the other though, as a patient we TRUST our doctors to be honest with us and make us aware of any and all side effects and/or concerns.

I had a friend who had the Essure procedure and I asked my doctor about it and all he did was hand me the paper and show me where to sign. I had to ask all the questions, he wasn’t giving any details up himself. But, like I said, I trusted in him. I went to him last week crying over the pain and he simply said he did not think it was because of the surgery because the pain would have been going on immediately after the surgery…clearly he had forgotten my call to his office three days after it was done. He wants to pin it on IBS and ordered me to go have all kinds of Barium X-RAYS and I was supposed to see him tomorrow. I never had the X-RAYS done and I don’t plan on seeing him tomorrow.

He had no compassion towards my pain, and even questioned why I was crying when he came back into the room after doing a pelvic exam and me explaining to him what kind of pain I was in. He sent me home with a prescription for Bentyl, a medicine used for IBS cramping. I never filled it.

As a woman, who has had all the same female parts for…FOREVER, I’d like to think I know the difference between pelvic, period-like cramping, and a tummy knot because my body can’t decide if it has to go number two or not. I am currently on the search for a new doctor, and I will go through as many doctors as I feel need be until I get answers that sound logical. I am only 24 years old, I refuse to spend the rest of my life in the condition I am now. 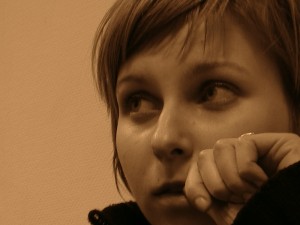