I had the Essure procedure in Oct 2011 after my 4th child was born. I had the confirmation test in February 2012 and was told everything was good to go & I was blocked. I got divorced in May 2012, and thought well I’ve got my kids & whoever I meet will just know that we can’t have any more. In June of 2012 I started seeing someone, and by August I had these horrible headaches, crazy dreams, and just this feeling I needed to take a pregnancy test. Probably most of all to ease my mind because there was NO WAY I could’ve been, Right? Wrong. I got a positive pregnancy test. I called my then boyfriend, who is like, ummm okay… Making him doubt if I had been lying to him about even having sterilization done and he had only been seeing me for a couple of months, did we REALLY want a child together so soon?? The same day I took the test I went to the OBGYNs office who placed the coils to see him (after demanding an appt. same day). He said, he was sure it was ectopic, he would do blood work to verify, because if I was pregnant it would be a miracle and he gave me some figure like 0.04% chance the pregnancy was viable. I brought my boyfriend with me to this appointment, so he could hear from the sources mouth that yes I did have sterilization done, and he was very supportive, and told me he’d be there for whatever WE decided to do. (Insert Relief Here) Lol. So the next day comes, my HCG level is right as it should be for a viable 4-5 week pregnancy. That’s great to hear that there are no complications so far, but how did this happen??? He didn’t know. I changed OBGYNs at this point, I just couldn’t trust him like I used to. My new OB said on ultrasound that for one I had a subchorionic hemmorhage over 40% of the placenta & was at risk of losing the baby (after all this stress, there’s more??? And I might lose this baby???) It was such a roller coaster of emotions for me. Secondly, he said that on ultrasound, my left coil was gone, and he did not see it anywhere. Ummm, how does it just disappear? He said that if the pregnancy was viable, at my c-section (my other pregnancies were cesarean), he would explore my bowel & other parts for it because he believes it would not come out through my cycle or vagina(TMI?), without me knowing about it. Turns out, in March 2013 I delivered Isabella Claire, 6lbs 19.6in beautiful and healthy. My boyfriend and I were married 12/12/12, not just for her sake but because I know he is my true soulmate. The OB never found the other coil. He said it’s been absorbed by some part of my organs for forever. I have major aches on my right side, I guess from the other coil? I’m so sensitive at times in that pubic area from my hip to my belly button and lower. My husband had a vasectomy done & I’m just praying that holds up a little better than this did. 5 is a handful! 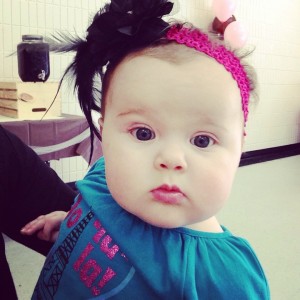