In may of 2009 I had an emergency c-section. The on call surgeon didn’t read my file and did not perform the requested tubal ligation. Three months later I was persuaded by my obgyn to get the Essure procedure.

August 27 2009, my procedure was horrible! Three stabbing shots of pain medication into my cervix. 45 minutes of horrible pain. The doctor had a hard time finding one of my Fallopian tube openings. I couldn’t get up off the table after the procedure for about fifteen minutes. The next few days were painful. Heavy bleeding and cramping.

Over the next few months, the bleeding and pain didn’t seem to stop. They never called me to schedule the three month follow up. Six months passed and they finally call, only to offer me an appointment at 7:00am in a hospital that is an hour away! I tell her I have a six month old, and two girls to get on the bus, I cannot get to an appointment that early! Well, it’s the only time they do this type of appointment, but at six months I should be fully closed anyway….so don’t worry about it.

Two years pass, I have these symptoms: sharp stabbing pain in my lower left side, back pain, heavy bleeding, joint pain, fevers, fatigue, and depression. I realize that I haven’t had an annual exam and pap in a while so I schedule one. During the exam the midwife asks how I am doing? So I proceed to tell her and include that I have been bleeding for 30 days straight. She says that is not good and schedules an internal ultrasound. During the ultrasound, the tech asked me if I have an iud? I say no, I had the Essure procedure. She turns the TV scene away from me and excuses herself from the room. She comes back in with the doctor. He takes a look and says ‘ wow, looks like one of her Essure coils is in her uterus.’ Then he says get dressed and meet me in my office. He then proceeds to tell me he can remove it vaginally in the office and will give me whatever pain medication I would like! I must have looked like a deer in the headlights because he says, ‘f*#k no, you don’t want to do that right?’ I Walked out crying and never went back.

I found another obgyn willing to remove them. She was kind and caring. She removed them vaginally under anesthesia and did a tubal ligation. One was embedded in my uterine wall, one was dangling out of the Fallopian tube. Recovery was rough. But the sharp stabbing pain was gone, and my periods returned to normal. However I still suffer from fatigue, joint pain, back pain, and now headaches. I started a page on Facebook called Essure Problems. I was blown away to find so many women joining and telling similar stories. Horror stories. In time we have gathered numerous documents in our files. One document is a page from Lakeshore surgical center on Essure removal. The surgeon states that removal by pulling them out is not the correct way to do it as they will break and many little pieces could get lost and left behind in the body. So now I struggle with the unknown fact whether these things are completely removed or bits and pieces are floating around my body. I still don’t feel like myself.

My pre Essure self. Ladies, do NOT get the Essure procedure. Join our Facebook page Essure Problems and research as much as you can, please! 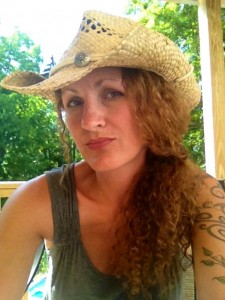 One thought on “Angie’s Story”