I had Essure implanted in 2007 at 25 years old. I have a known reaction to nickel since I was a child, and asked the doctor and nurse about the compounds used in essure. Their response was that ‘it does not contain enough nickel to create a response.’ I was then put under general anesthesia for this ‘non-surgical’ procedure. I followed up for my 3 month placement test, and I remember already having issues at that point.

Within the three months, I began having strange rashes and boils all over my body, as well as generalized joint pain that should not have been an issue at that age. None of the doctors or nurses followed up with those symptoms. I finally saw a dermatologist and he diagnosed me with psoriasis and psoriatic arthritis. These are autoimmune diseases, and never did he mention that possible triggers could be foreign bodies or medical devices, although it is well documented in many autoimmune studies.

For years, I managed my conditions, but over time I began having other unexplainable symptoms. Hair loss, debilitating chronic and frequent migraines, chronic fatigue, bloating that made me appear to be pregnant, horrendous cramps throughout the month, disgustingly heavy bleeding with large clots, pain on intercourse, and many many others.

Just this week, I was able to have a hysterectomy and bilateral salpingectomy, removing the essure devices from my body. Within 24 hours, my abdominal bloating has markedly decreased, my hands are not puffy and swollen, and my pain level is decreasing daily.

Can you imagine, having to actually remove your body parts because a foreign object that the FDA has labelled as ‘safe and effective’ is wreaking havoc on your entire body? 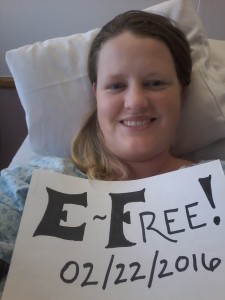